Ghost in the Shell: StandAlone Complex

(The image is from a Stand Alone Complex DVD. TheRussian/Latin subtitle (the "j" could have been transliterated as"y") means "Watch in Awe, Fly in Glory". )

lost her human body when she was 6 years old

The only surviving part of her human body, her 6-year-old brain,was put in a female cyborg body (patterned on a 23-year-old human)containing a second brain.

She in turn challenges him

and when he accepts her challenge, she uses her double brain

to control his brain and the direction of his blow

so that he knocks himself out

When Motoko isinjured and goes to get a replacement body, her friend comments onher new body (the same type as the old one), and Motoko replies:

When a sadistic lesbian doctor abuses Motoko during thereplacement operation

and ghost hacks into Mokoto's new replacement body so it canresist the doctor:

During those events, the LaughingMan takes Motoko to his home on the web

At the end of those events, the LaughingMan leaves Mokoto's new body. Sheremains in her old body (later repairing her damaged left arm) andkeeps her new body as a backup/decoy.

to which Motoko replies 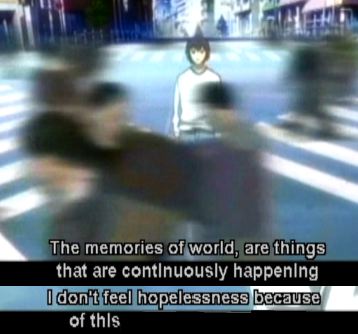 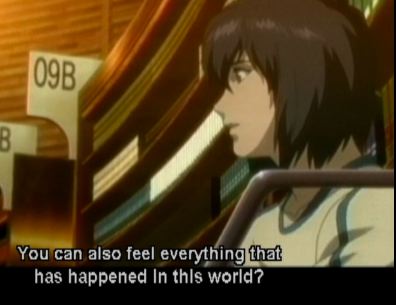 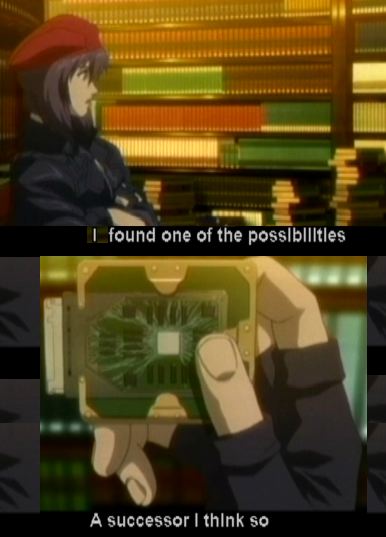 Humans who spent much futile effort trying to construct ConsciousAI with classical computer systems andbemoaned their failure may be caught by surprise when they to findthat the first large, well-connected QuantumComputer system they construct exhibits spontaneous Consciousbehaviour. Motoko's initial hostile reaction to the first generationof Tachikomas is an example of a reaction to such a surprise.

Quantum Computer Tachikomas are notconfined to classical logic structures, incontrast to Androids having only classicalcomputer structures ( such as 20th centuryso-called "neural nets", "fuzzy logic", etc., that deals at best withprobabilities instead of the more truly fundamental QuantumAmplitudes ). 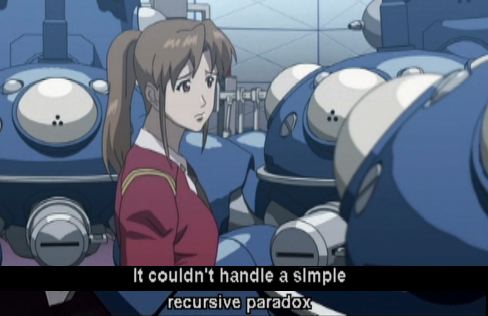 Motoko's change of mind toward Tachikomas, after observing theircooperative, even altruistic, behaviour, is a model for cooperativecoexistence of all forms of consciousness. 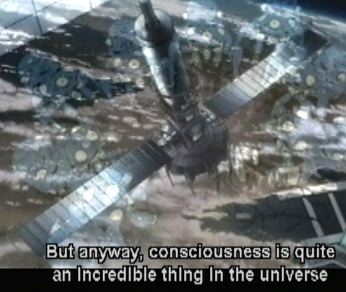 Here is One Way to Visualize Levels of Life Forms in terms ofD4-D5-E6-E7-E8 VoDouPhysics: 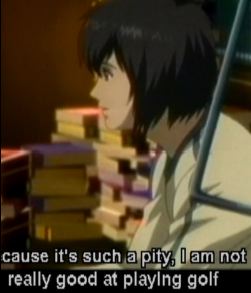 In concert with Aramaki, the Police Chief protects the LaughingMan's privacy: 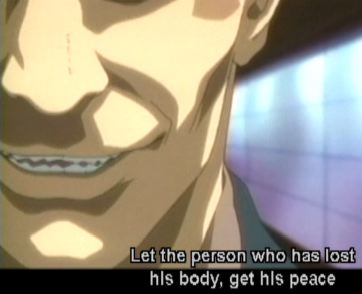 The Laughing Man's namesake is a character in astory by J. D.Salinger in The New Yorker of 19 March 1949, a sonChinese missionaries who

"... was kidnapped in infancy by Chinese bandits. When the wealthy missionary couple refused (from a religious conviction) to pay the ransom for their son, the bandits, signally piqued, placed the little fellow's head in a carpenter's vise and gave the appropriate lever several turns to the right. The subject of this unique experience grew into manhood with a hairless, pecan-shaped head and a face that featured, instead of a mouth, an enormous oval cavity below the nose. The nose itself consisted of two flesh-sealed nostrils. In consequence, when the Laughing Man breathed, the hideous, mirthless gap below his nose dilated and contracted like ... some sort of monstrous vacuole. ... he kept his face covered with a pale-red gossamer mask made out of poppy petals. ... Every morning, in his extreme loneliness, the Laughing Man stole off (he was as graceful on his feet as a cat) to the dense forest surrounding the bandits' hideout. There he befriended any number and species of animals: dogs, white mice, eagles, lions, boa constrictors, wolves. Moreover, he removed his mask and spoke to them, softly, melodiously, in their own tongues. They did not think him ugly. ... he ... picked up the bandits' most valuable trade secrets ... and briskly set up his own, more effective system. ... Soon his ingenious criminal methods, coupled with his singular love of fair play, found him a warm place in the nation's heart ...[ and he ]... amassed the largest personal fortune in the world. Most of it he contributed anonymously to the monks of a local monastery--humble ascetics who had dedicated their lives to raising German police dogs. What was left of his fortune, the Laughing Man converted into diamonds, which he lowered casually, in emerald vaults, into the Black Sea. His personal wants were few. He subsisted exclusively on rice and eagles' blood, in a tiny cottage with an underground gymnasium and shooting range, on the stormy coast of Tibet. Four blindly loyal confederates lived with him: a glib timber wolf named Black Wing, a lovable dwarf named Omba, a giant Mongolian named Hong, whose tongue had been burned out by white men, and a gorgeous Eurasian girl, who, out of unrequited love for the Laughing Man and deep concern for his personal safety, sometimes had a pretty sticky attitude toward crime. The Laughing Man issued his orders to the crew through a black silk screen. Not even Omba, the lovable dwarf, was permitted to see his face. ...".

The text on the Laughing Man cybermask

is aquotation from Holden Caulfield in J D. Salinger's Catchers in theRye. The Laughing Man has a baseball catcher's mitt on which iswritten

"You know what I'd like to be? I mean if I had my goddamchoice, I'd just be the catcher in the rye and all."

An excerptfrom what Holden Caulfield says in J. D. Salinger's book The Catcherin the Rye

"... I keep picturing these little kids playing some game in this big field of rye and all. Thousands of little kids, and nobody's around - nobody big, I mean, except me. And I'm standing on the edge of some crazy cliff. What I have to do, I have to catch everybody if they start to go over the cliff - I mean if they're running and they don't look where they're going I have to come out from somewhere and catch them. That's all I'd do all day. I'd just be the catcher in the rye and all. ..."

shows "catcher" as meaning protector of the helpless, such aschildren. Another HoldenCaulfied excerpt with the same tone is

A "catcher" as a protector is somewhat similar to a baseballcatcher, who must call pitches and set defensive positions so as toprotect his team from being hurt by hits from the other side, whichmay be why The Laughing Man likes to play baseball as a

catcher ( a position played by JoeTorre ).