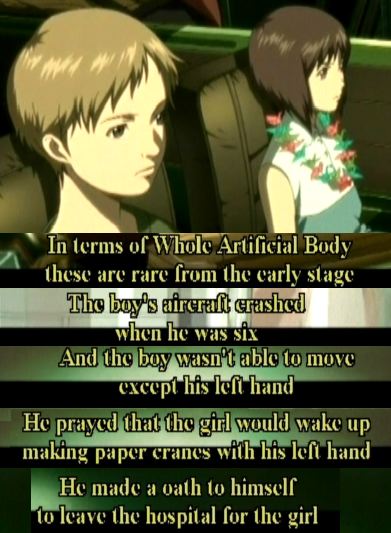 After Gos becomes adapted to an adult Full Cyborg body, he joinedthe Army, served in a 21st Century Korea War, became disillusionedwith post-war suffering, worked with refugee groups in Åsia,and was recruited by Japanese Internal Affairs Officer Goda toorganize the refugees in Japan. Goda told Gos to fulfill anassassination threat against the Japanese Premier. Gos attacked thePremier in a Shinto Temple, but Motokoand Bateau intervened and Gos jumped through the ceiling and escaped.( Note that the hole in the ceiling made by Gos'sescape is the opposite focus of the Jewel pursued by the Dragon inthe ellipse of the ceiling painting, and that thegeometry of an ellpsoid with two foci is the goometry of athermonuclear bomb. ) 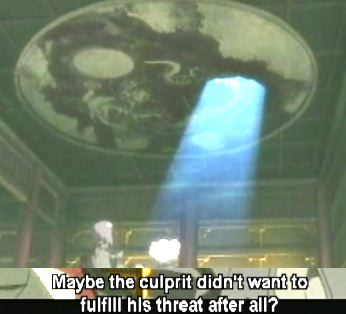 Goda was a Taiwanese who suffered major injury in Asian Wars. Hishead was reconstructed with a heavily cyborgized brain. He came toJapan when China failed to give him a position of power. Goda was notloyal to Japan, but used his Internal Affairs position, and covertties to the Imperial Americana CIA, to further his own agenda. 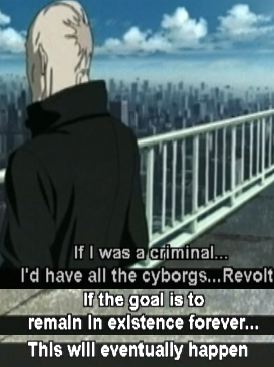 Goda planned to use a stolen Russian nuclear weapon to eitherdestroy Nagasaki (blaming the refugees) or destroy the refugeecommunity (blaming the Japanese military), so that the cyborgs ofJapan would be so appalled by such destruction being wrought byhumans that they would revolt against human rule and seize control ofJapan. Then the cyborgs of Japan could take control of China, and allthe rest of Asia.

Section 9 thwarted that plan by seizing the nuclear weapon. Duringthat operation, Motoko realized that the refugee PuppetMaster leader was her chilhood friend Gos. 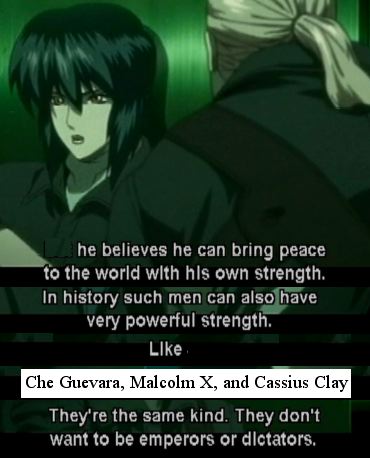 Motoko encountered Gos in the Japan refugee area during theattack

by the Japan military ( which was similar to anyother attack by a force having far superior technology to its enemy,whose only available opposing tactics are guerilla attacks andsuicide

protests and attacks, reminscent of successfulVietNamese opposition to the USA in the 1960-70s and resistance (outcome unknown in January 2005 ) to theUSA in the Middle East in the 2000s ). 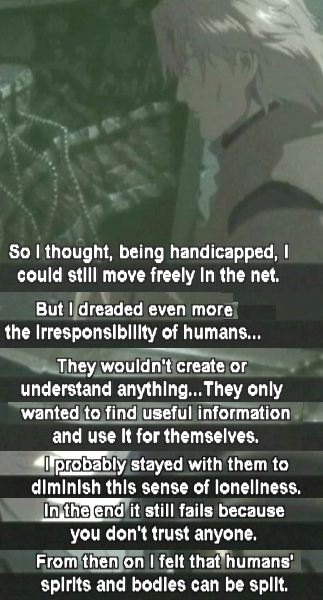 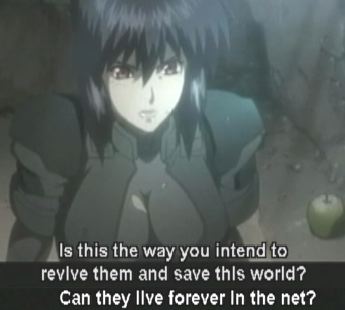 As the Laughing Man said 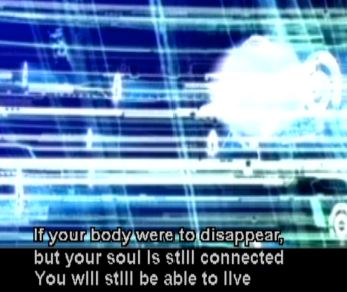 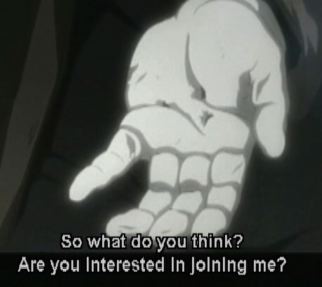 Meanwhile, Goda, having lost control of the stolen Russian nuclearweapon, had made a deal with  the Imperial Americana CIA

for an Imperial Americana nuclear submarine to launch a nuclearmissile at the Japan refugee area, and to blame the nuclear explosionon either a mass suicide by the Japan refugees or an attack by theJapan military (either way, the cyborgs of Japan would be appalledand revolt against human rule).

The American nuclear missile was launched. Neither the Japanmilitary or the refugees were able to stop it, so Motoko agreed withGos's proposal and ordered the Section 9 Tachikomas to preparecomputer memory space in the Tachikoma QuantumComputer AI satellitefor the spirits/souls of her and Gos and as many of the refugees asBateau could contact, hoping that their spirits/souls might surviveeven though the Imperial Americana nuclear missile would kill theirbodies.

However, the Section 9 Tachikomas decided to do somethingelse: 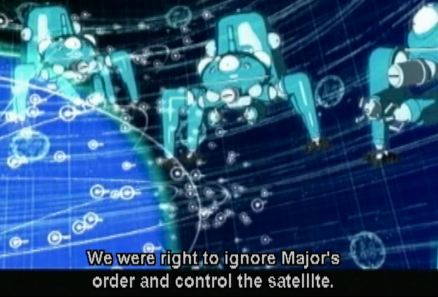 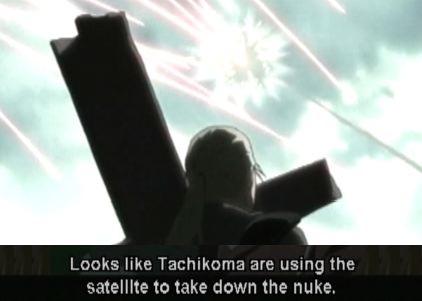 ( Note theCross born by Bateau, like the Cross ofJesus,Bateau being a good physical being. )

The Tachikoma kamikaze satellite interception of the missileproved that their synthetic QuantumComputer AI had freewill Ghost souls.

Having been saved by the Tachikomas, the Premier, backed bySection 9, ordered the destruction of the Imperial Americana nuclearsubmarine and set the government of Japan on an independent policy ofcooperation with China. 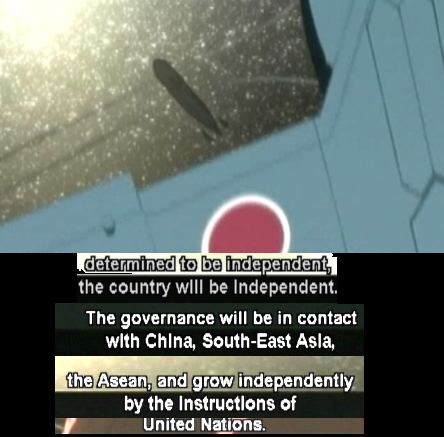 Goda, his plan for a cyborg-ruled Japan having failed, 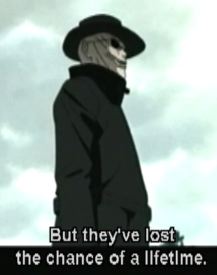 attempted to defect to Imperial Americana through his ImperialAmericana CIA contacts, but Section 9 intercepted him. 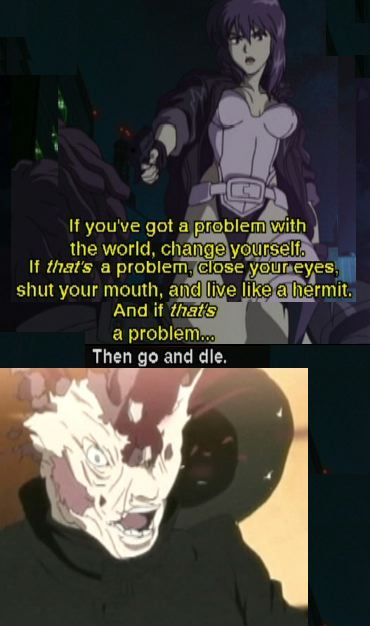 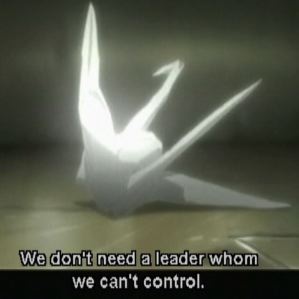 and killed his Full Cyborg body. 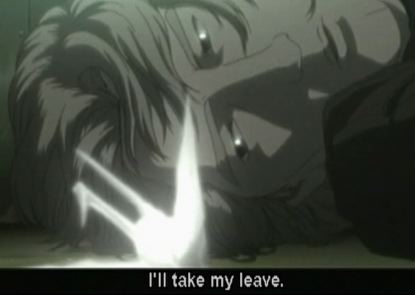 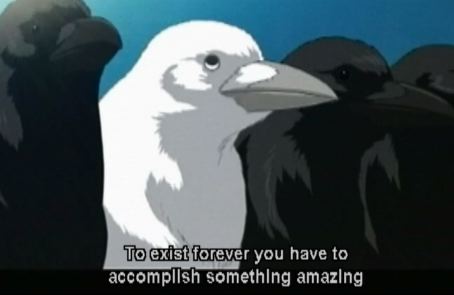 went to live on the net. 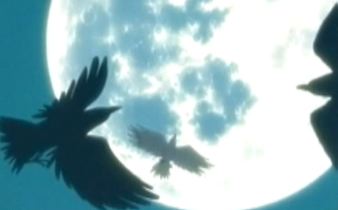 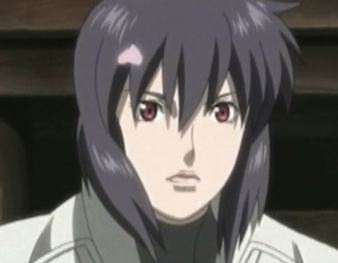 whereupon she went to the vast net/city to search for him. 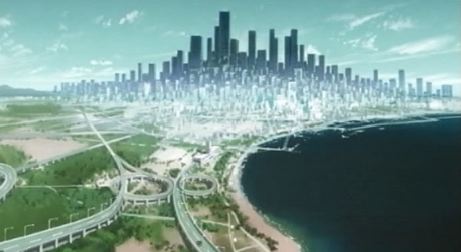