Since my father was Frank Smith, my paternal Y-DNA ancestorswould, if the current naming system had been in effect since theadvent of humans here on Earth, all have been named Smith. Althoughmy geneaology research has only traced my paternal Smith line back toBenjamin Franklin Smith (1816-1893), on this page I will refer to theline of all my paternal ancestors as the Smith line, which as beentraced by the National Geographic Genographic project as having Y-DNAlineage M35-M96-YAP-M168. They show the ancient part of the Smithline geographically as 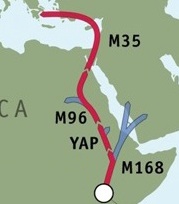 By about 55,000 years ago mtDNA populations (gold lines)with the basic mitochondrial energy structure had spreadthroughout the Indian Ocean area and functioned as a substrate onwhich populations with basic human physiology (determined by nuclearDNA chromosomes including the Y-Chromosome) might emerge. 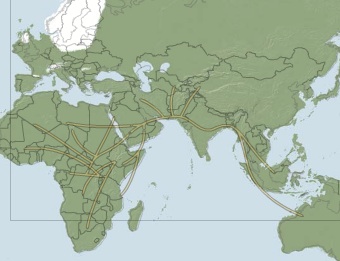 Somewhat after 79,000 years ago the Smith line began as part ofM168 by moving north toward the Nile River

The remaining not-Smith bulk of M168 went across the Red Sea toArabia and as M89 and M9 went on to the Pamir Knot where they splitinto three groups that founded most of the populations of Europe,China, and India

Also about 50,000 years ago, M174 split off from the Smith line ascousins sharing the YAP-DNA. They followed the coast from the Red Seato the Indian Ocean to the Pacific Ocean

Their southern branch may have combined with mt-DNA L0population 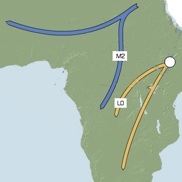 to form the Boskop population which had the largest brains inhuman history, but seems to have been extinct since about 10,000years ago. As to what stress may have caused the extinction of theBoskop, as late as around 15,000 years ago, glaciation was still at ahigh level 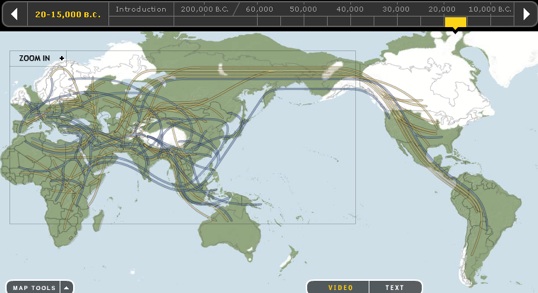 but by about 10,000 years ago most of the glaciers had melted 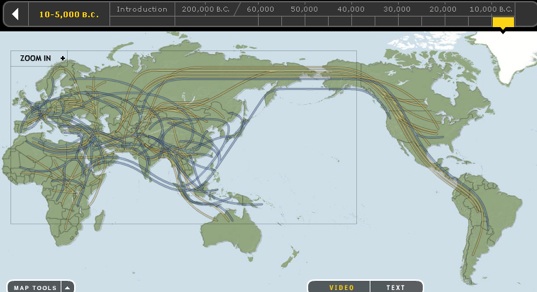 producing a much higher sea level that flooded much productiveland. The loss of so much productive land led to conflict overlimited resources, producing a strong evolutionary advantage fororganized military with highest war technology, and a strongevolutionary disadvantage for contemplative high-level spirituality.From this time on, the large-brained Boskop were extinct and,acccording to a 23 March 2008 entry in john hawks weblog, "... therehas been a reduction in the average brain size in South Africa duringthe last 10,000 years, and there have been parallel reductions inEurope and China -- pretty much everywhere we have decent samples ofskeletons, it looks like brains have been shrinking ...".

Since (as anyone who has been through basic training knows)military discipline requires a high level of blind obedience andtechnical skill and also a low level of creative independentcontemplative thought, it is not hard to understand why the Boskopmight have been easy to kill off and why human brain size has beendeclining, especially in light of facts stated on the above-mentioned23 March 2008 entry in john hawks weblog: "...

About 20,000 years ago, the Smith part of M96 continued as M35 togo north along the Nile River and the Mediterranean Sea

which is how the Smith line came to be in the Northern Adriaticpart of the Roman Empire around 2,000 years ago and then 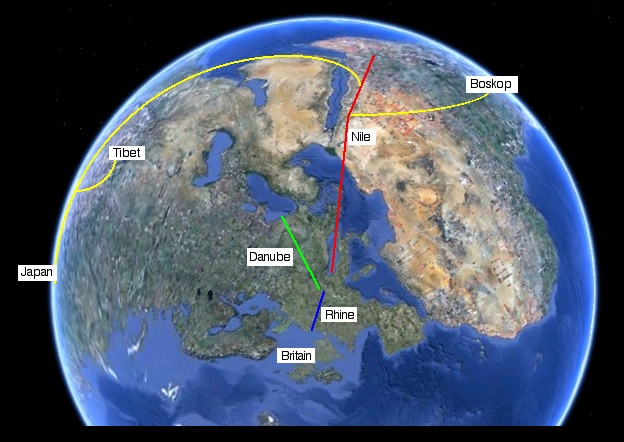 as Roman Legionnaires were stationed along the Danube Limesfrontier fortifications, and then along the Rhine and on toBritain.

After the Smith line split off to go up the Nile River, the bulkof the M168 line and its successors (magenta) went on to populate theinterior of Eurasia by going to Arabia, then to Eden and then to thePamir Knot 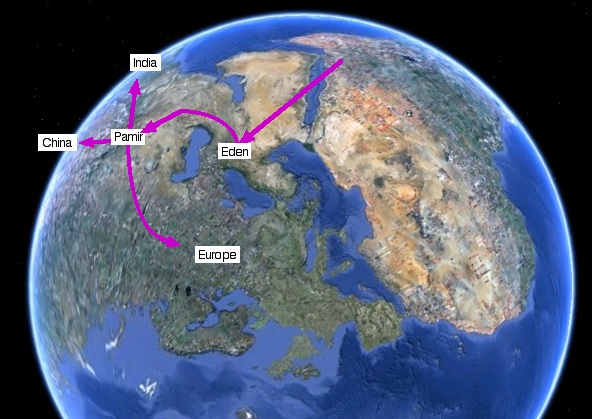 from which three branches emerged which populated India, China,and most of Europe. 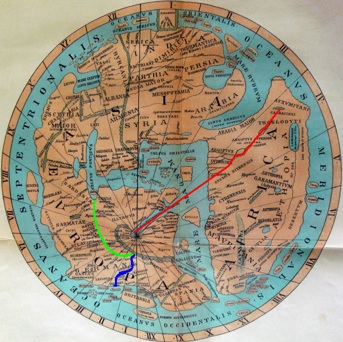 on which I have colored the Smith line Nile (red), Danube (green),and Rhine (blue) Rivers, but since the Roman view of the world atthat time did not include Japan, Tibet, or the Boskop I did not tryto show the paths (yellow in the global map above) of the Smith lineYAP or M96 cousins.

As to the Roman Legion part of the Smith line, my cousin FredSmith, who shares my paternal Y-DNA, said "... the YHRD database thatplots the frequency of Y-DNA results per population andgeographically (actually maps it) ...[gives]... morespecifics re our Y-DNA - as far as Italy is concerned, concentratedin north eastern Italy. As per our previous research, found along theRhine near Cologne and Bonn, also the Roman settlements of Chester,London and the boundary between Wales and England, very much tracingthe path that Caligula's and Claudius' armies took enroute to Britainand where stationed there. What was fascinating though is it's veryhigh frequency in modern day Czech Republic, specifically in theregion known as Vysocina, the center of which is the town of Telc...".

It is interesting that our Y-DNA Roman Legion ancestors leftdescendants in Telc, but when you look at geography it makes sense.If our ancestors' Roman Legions were formed in North Eastern Italythen it would be an easier march to go around the Alps as shown onthe following Google Earth images and that route would go pretty muchdirectly to Telc 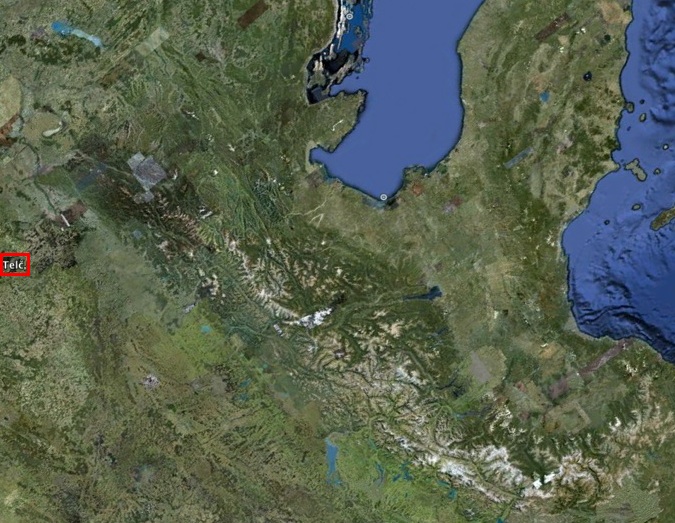 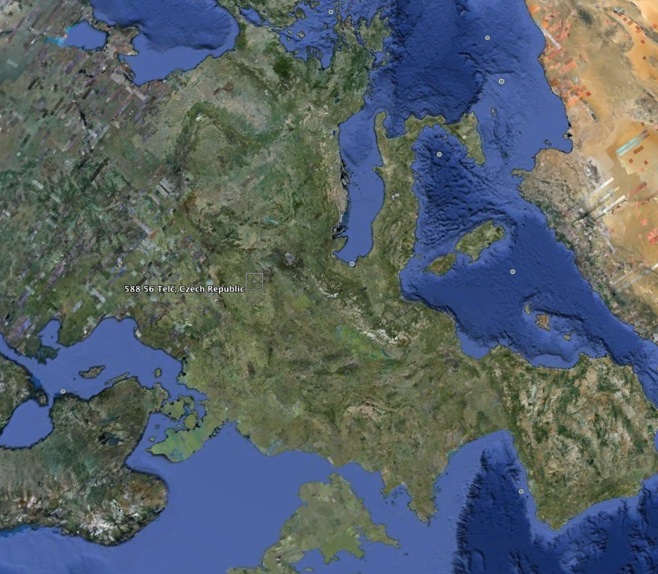 "... Both Caligula and Claudius had ... plans to invade Britain... it seems that Claudius created the limes along the Rhine andDanube ...". 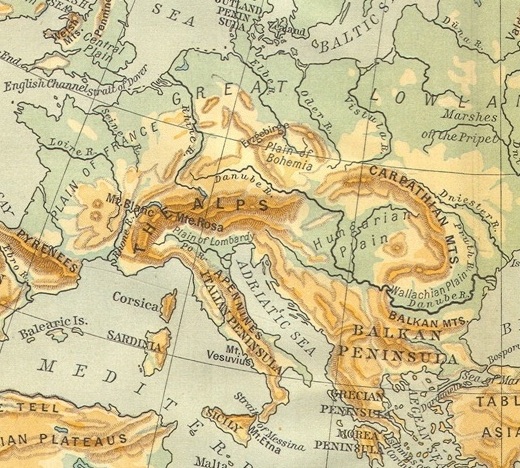 As to the details of the invasion of Britain by Claudius in 43 AD,I have not found anything much better than wikipedia, which says inpart:

"... The main invasion force under Aulus Plautius crossed in threedivisions. The port of departure is usually taken to have beenBoulogne, and the main landing at Rutupiae (Richborough, on the eastcoast of Kent). Neither of these locations is certain. Dio does notmention the port of departure, and although Suetonius says that thesecondary force under Claudius sailed from Boulogne, it does notnecessarily follow that the entire invasion force did. Richboroughhas a large natural harbour which would have been suitable, andarchaeology shows Roman military occupation at about the right time.However, Dio says the Romans sailed east to west, and a journey fromBoulogne to Richborough is south to north. ... An alternativeexplanation might be a sailing from the mouth of the Rhine toRichborough, which would be east to west. ...

Strabo (Geography 4:5.2) names the Rhine as a commonly-used pointof departure for crossings to Britain in the 1st century AD. ...

Suetonius says that Claudius received the surrender of the Britonswithout battle or bloodshed. ... Cassius Dio relates that he broughtwar elephants and heavy armaments which would have overawed anyremaining native resistance. ...".

According to a danube-limes.eu web page:

to my paternal ancestor Benjamin Franklin Smith born in 1816 whichline continues to the present day,

My cousin Fred told me that Benjamin Franklin Smith's 1816birthplace has been given by different sources as Virginia, SouthCarolina, and Georgia, and also that his wife, Mary BrewsterDickerson (1819-1895) may have lived in Rockingham County, Virginia,near Harrisonburg. Although some Smiths lived in that area aroundthat time, including Abraham Smith and Daniel Smith whose residenceis known as Smithlands, no records that I have seen show any relationto Benjamin Franklin Smith born in 1816.

Whether or not he is my ancestor, Abraham Smith may have led aninterersting life. From various sources found by my cousin Fred, itseems that Abraham Smith was Sheriff of Rockingham County, had servedin the Virginia Militia in the French and Indian Wars, had beencaptured by the French and spent some time in France, and may havebeen falsely accused of treason after his return to the USA.

Although there is a 1,400 year gap in my purely paternal Smithline, a mixed-gender line leading back from Mary Brewster Dickerson(1819-1895) can be traced back to 1170 AD, 23 generations back frommy cousin Fred and me, as follows:

Some Smith-Taylor line data including

Some Smith-Culpeper line data including 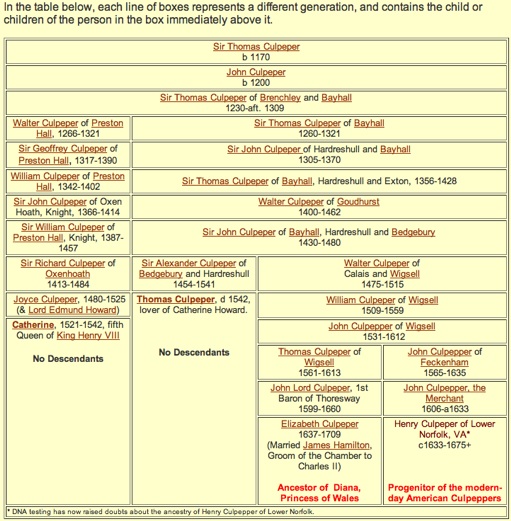 Consideration of the history of Britain from 400 AD to 1100 ADindicates such turmoil that it might be hard to find records to fillin that gap in the Smith line. According to A time-line of Britain byPiero Scaruffi: