The heaviest mass state nu_3 corresponds to a neutrino
whose propagation begins and ends in CP2 internal symmetry space,
lying entirely therein. According to the D4-D5-E6-E7-E8 VoDou
Physics Model the mass of nu_3 is zero at tree-level
but it picks up a first-order correction propagating
entirely through internal symmetry space by
merging with an electron through the weak and electromagnetic forces,
effectively acting not merely as a point
but
as a point plus an electron loop at both beginning and ending points
so
the first-order corrected mass of nu_3 is given by
M_nu_3 x (1/sqrt(2)) = M_e x GW(mproton^2) x alpha_E
where the factor (1/sqrt(2)) comes from the Ut3 component
of the neutrino mixing matrix
so that
M_nu_3 = sqrt(2) x M_e x GW(mproton^2) x alpha_E =
= 1.4 x 5 x 10^5 x 1.05 x 10^(-5) x (1/137) eV =
= 7.35 / 137 = 5.4 x 10^(-2) eV.
Note that the neutrino-plus-electron loop can be anchored
by weak force action through any of the 6 first-generation quarks
at each of the beginning and ending points, and that the
anchor quark at the beginning point can be different from
the anchor quark at the ending point,
so that there are 6x6 = 36 different possible anchorings. 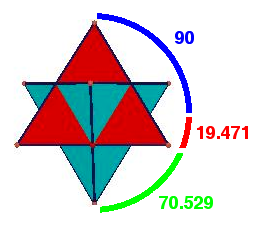 Then we have for the neutrino mixing matrix:


for a result of


if the matrix is modified by taking into account
the March 2012 results from Daya Bay observing non-zero theta_13 = 9.54 degrees.


Here is a pdf version of this page.

Ken Shoulders and Steve Shoulders said in 1996: "... Highly organized, micron-sized clusters of electrons having soliton behavior ... have been investigated by K. Shoulders since 1980 ... a short Latin acronym has been adopted and the structure is called an EV, for strong electron. Their organizational properties have been theoretically studied and reported by P. Beckmann [... Petr Beckmann, "Electron Clusters," Galilean Electrodynamics, Sept./Oct., Vol. 1, No. 5, pp. 55-58, 1990 ...] and R. Ziolkowski [... Richard W. Ziolkowski and Michael K. Tippett, "Collective effect in an electron plasma system catalyzed by a localized electromagnetic wave," Physical Review A, vol. 43, no.6, pp. 3066-3072, 15 mar., 1991 ...] ... What is seen in the laboratory is an extremely energetic entity ... Measurements ... measuring the charge-to-mass ratio of the structure ...[by]... time-of-flight ... have been made showing there are no included ions to a limit of at least one ion per million electrons. The total number of electrons in a one micrometer diameter EV is 10^11. ...". In 1999 they said: "... Throughout much of this work on EV energetics it has been obvious that we get more energy out of certain experiments than we put in. ...".

"... picture is of a self-assembled spherical shell or maybe a kind of Buckyball of N close-packed electrons each of effective surface area ~ (h/mc)^2. This forms a closed cavity - with some leakage perhaps, but the leakage rate decreases as N increases. Obviously there will be a cavity boundary condition Casimir effect but I am pretty sure it is usually negligible in comparison with my strong gravity effect from Einstein's general relativity. ...

1. The repulsive electro-static self energy per unit electron mass for the N poly-electron cluster is V(Coulomb Self-Energy) ~ N^2e^2/mr > 0 where the N electrons are arranged in a mono-layer thin spherical shell of thickness h/mc ~ 10^-11 cm

That is, N on-mass-shell bare electrons each of radius e^2/mc^2 ~ 10^-13 cm in a soup of virtual plasma of virtual photons and virtual electron-positron pairs - the latter partially condensed as a vacuum condensate!

... a Casimir force ... plays a minor secondary role. The Casimir potential energy per unit electron mass will be of the form V(Casimir) ~ C(hc/mr)N(h/mcr)^2 Where C is a dimensionless coefficient that can be positive or negative ... Note that V(Casimir) scales only as N because it depends on the surface area of the N poly-electron thin shell. This is a boundary effect!

Ignoring rotational and vibrational modes - to be added later. All we have next is the GR correction term ... V(Dark Energy) = c^2/\zpfr^2 a 3D Harmonic Oscillator Potential like a ball in a tunnel through center of Earth

So I do not care about Casimir force, which when N >> 1 is obviously a small perturbation!

We also have the stability constraint: d^V(total)/dr^2 > 0

When this constraint is violated WE HAVE WHAT IS BEGINNING TO SUGGEST A BOMB! ...

My model for EVOs also makes a spherical shell, but it is a two-layer shell, motivated by the formation of a blastocyst two-layer shell in embryology, and it also explains how the door to the high-energy vacuum is opened.

FORMATION OF THE 16 CONFIGURATION IS LIKE THE MORULA / BLASTOCYST TRANSITION

( At age 4 days, a human embryo consists of a solid ball of 16 cells, called the morula. At the next stage of cell division, the blasocyst forms. Here is a blastocyst image 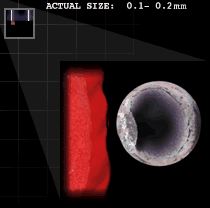 from http://www.visembryo.com/baby/stage3.html which states: "... Cell division continues, and a cavity known as a blastocele forms in the center of the morula. Cells flatten and compact on the inside of the cavity ... the appearance of the cavity in the center the entire structure is now called a blastocyst. ... two cell types are forming: the embryoblast (inner cell mass on the inside of the blastocele), and the trophoblast (the cells on the outside of the blastocele). ...". )

Tony Smith's Home Page - Here is a pdf version of this page.